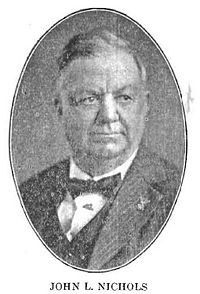 John L. Nichols (1859–1929) was one of Bloomington's first professional architects. Nichols designed many of the downtown buildings that still stand today. His Allen Building is in the Queen Anne style, while the First National Bank building is more Classical Revival. He also designed the Von Lee and Knights of Pythias Buildings.

In addition, Nichols remodeled the Princess Theatre in 1923, using glazed white tile and della Robbia fruit that are stll unique to Bloomington today.

Nichols married the former Jennie Sare and they had one child, Bridge. Nichols filed for divorce in 1895, alleging that his wife was having an affair. He then married Anna Keeler in 1897 and Mabel Dunn, who had previously been married to Delbert McCoy, in 1903. She was the granddaughter of Felix Clelland Dunn.

In early adulthood Nichols worked with his father Hiram J. Nichols in the firm Nichols & Sons, a construction and architectural firm. He later ran a shop selling architectural woodwork and supplies. In about 1886 Nichols relocated to Denver where where he worked for the firm of F. E. Edbrooke & Company as a draftsman and supervising architect. His half-brother Leo Morton Nichols, known as 'Mort', also worked as a draftsman at F. E. Edbrooke in 1888. After the Panic of 1893 construction work became scarce and Nichols appears to have have been itinerant, moving wherever work was available. This period included some work with Pissis & Moore in San Francisco, including a stint as a supervising architect on 'The Emporium' on Market Street.

In August 1895 Nichols returned to Bloomington and set up shop as J. L. Nichols, Architect. Many of his works from this time are documented in a catalog he published in 1902 entitled 'Nichols Album of Artistic Dwellings'. He maintained an office in Bloomington until late 1899 when he moved to Indianapolis and lived at his half-brother Mort's address. This appears to have lasted for only about six months. Nichols then returned to Bloomington to work on the Kirkwood Observatory and the rebuilding of Wylie Hall, which had partially burnt in early 1900. Nichols office remained in Bloomington for the rest of his career.

The April 1, 1905 edition of The Construction News announced the formation of Nichols & Son, a partnership between John Nichols and his son Bridge Nichols. Bridge unexpectedly died of influenza in February of 1911, at the age of 31. The name Nichols & Son continued to appear in the construction press through 1912. In 1913 John formed a partnership with his brother Mort. This firm was called Nichols & Nichols. Mort in his youth had worked with his father and John in the construction business, but had relocated to Indianapolis, where he was working in retail men's clothing. Mort lived in Bloomington for about a year before once again leaving for Indianapolis. John resumed business as J. L. Nichols, Architect and practiced under that name until his death in 1929.