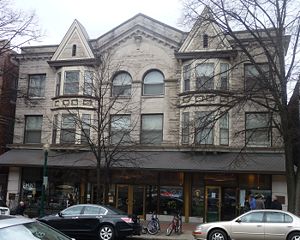 The Allen Building on Kirkwood Avenue currently houses the Michael's Uptown Cafe, and apartments up above. Built in 1907, it was the home of the Bloomington National Bank in the 1930's, 40's, and 50's, and the Bloomington Star-Courier weekly newspaper had its printing plant downstairs in the 1950s.

The building had a reputation as an artist's hangout in the 1970's and 80's. At various times it had housed various artistic or Bohemian businesses in the public spaces and tenants in private apartments. But in 1993, the building was sold to Sterling Ventures Partners, a group including Peter Dvorak among others, and they converted it to upper-scale apartments.

In 1999 the building was sold to Michael Fitzgerald, who renovated the building again, this time with an eye towards returning the building to something like its original state. He removed paint from the brick and limestone block walls and exposed windows that had been boarded up. On the street level, he restored the cut-glass art deco-style transom windows and redid the front street-level in bronze and copper.

A pressed tin ceiling is still visible at the Uptown Cafe.

The building was designed by the firm Nichols & Son in 1906. James A. Pike was the general contractor. Construction was completed in 1907.

Another building referred to as the Allen Building is the Charles Gilbert Shaw House and Studio at the corner of Washington Street and 6th Street in Bloomington. Over the years this building was the site of the Allen Funeral Home and Monroe County offices. It has a serpentine brick wall along the sidewalk on 6th street that was added when the building was converted to apartments.

Businesses in the building