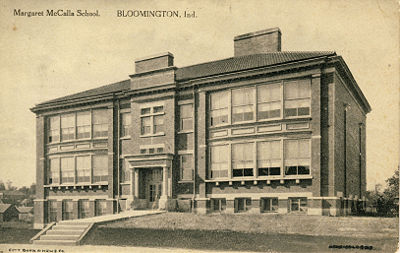 John Nichols and Bridge Nichols formed the architectural firm of Nichols & Son in early 1906 and practiced together until Bridge's untimely death in February 1911. The firm prospered early in its existence, especially in the boom year of 1907, when it had several large projects. After the Panic of 1907 in October business came to a standstill. There are no projects listed for the firm in the construction press of 1908 and only a few residential projects for 1909.

The following projects are attributed to Nichols & Son:

Axtell Residence, south side of East 10th Street between Fee and Jordan, 1906 (no longer standing)

It is impossible to determine which architect is primarily responsible for any given design.

The name Nichols & Sons was previously used in Bloomington in the 1880's by H. J. Nichols and his sons John and Mort Nichols.