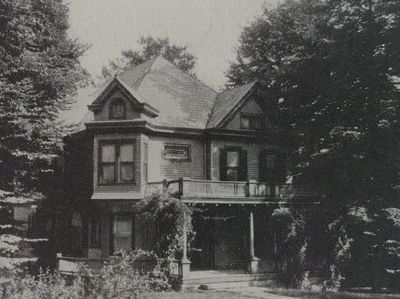 Forest Place was a small sub-division created in 1897 on the eastern edge of the Indiana University campus. It was created by William P. Rogers, dean of the Indiana University School of Law and his wife Belle in 1897. It consisted of fourteen lots on the east side of a street that was also known as Forest Place. The sub-division no longer exists. Indiana University over time acquired all fourteen lots. The street and all of the houses built along it have all been demolished. The concrete walkway that runs from Third Street northward along the west side of Jordan Hall and Ballantine Hall approximates the path of the street.

Of the fourteen lots, only eight were improved prior to the construction of Ballantine and Jordan Halls (excluding a war time Quonset hut on Lot 8).

Lot 1 was the site of Alpha Hall, a private women's dormitory built by Theodore J. Louden and others. It was located at the corner of Third Street and Forest Place. The site is now green space between Jordan Hall and 3rd Street (photo).

Lot 4 was known as Mottier Hall when it was demolished to make way for Jordan Hall (photo). It appeared in city directories as 215 S. Forest Place.

Lot 5 was known as the Aley House or the Student Health Center (photo). This site is now a plaza between Ballantine and Jordan Halls. (209 S. Forest Place)

Lot 6 was known as the Hepburn House (photo). It was located immediately south of Ballantine Hall, although the two structures co-existed only briefly. This site is also part of the plaza referred to above. (203 S. Forest Place)

Lot 7 was know as the Tarkington House (photo). It was originally a home built for John and Myra Bergstrom. It was demolished to make way for Ballantine Hall. (137 S. Forest Place)

Lot 9 was the site of a rental property built by George L. Reinhard in 1906 for use by sororities (photo). The address was listed variously as 127 or 133 S. Forest Place. The house was destroyed by fire on December 22, 1922 and was not rebuilt. That same day a house at 422 N. Washington Street was destroyed by fire. The Bloomington Fire Department fought both fires simultaneously.

Aerial photos show a Quonset hut on Forest Place Lot 9 in the post World War II era prior to the construction of Ballantine.

The house on lot 10 was known as Lincoln House when it was demolished to make way for Ballantine Hall (photo). The house was originally George and Mary Reinhard's home. George become dean of the law school when William Rogers left for a law school in Cincinnati. (119 S. Forest Place)

Lot 11 was known as Riley Manor when it was demolished to make way for Ballantine Hall (photo). It was originally the home of Reinhard's daughter Anna Reinhard Louden and her husband Theodore J. Louden. (117 S. Forest Place).

The Reinhard sorority house on Lot 9 was designed by local architect John Nichols.

The Bloomington Evening World of July 29, 1897 ran an item that read in it's entirety: "Architect T. A. Winterrowd of Indianapolis was in Bloomington drawing plans for a number of local citizens who were planning to erect homes in Forest Place." Tax records for 1899 show that only three lots in Forest Place were improved at that time: the Louden, Reinhard and Bergstrom residences. All three houses were apparently subjected to alteration over the years. Of the three, an early photo exists only for the Bergstrom residence and it does have the look of a high style house designed by an out-of-town architect.