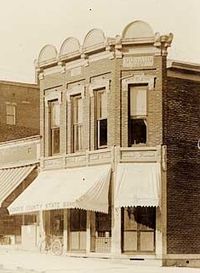 Hiram Jackson ‘Jack’ Nichols was born November 17, 1824 in Shelby County, Kentucky. His family moved to Perry Township, Monroe County when he was two years old. In early adulthood Nichols worked as a farmer and carpenter. He moved to Bloomington in 1854, where he worked as a carpenter, building contractor and architect and also served as president of the town board. He was the father of six children with his first wife Rebecca Rogers. One child died in infancy. Rebecca died in 1868 and Nichols then married Catharine Bray. They had one child named Claude who died at five years of age. Catharine died in 1882 and he married Jennie McPhetridge in 1883.

‘Jack’ Nichols had a long and prolific career as a builder and architect, including jobs as far away as Arkansas. Documentation for which projects he was involved with and in what capacity is fragmentary. Nonetheless, the following projects can be attributed to him as builder:

The following projects can be attributed to him as architect: