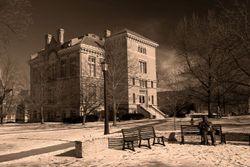 Owen Hall and the statue of Herman B Wells by Kagan Tuncay.

Owen Hall is one of the buildings in the Old Crescent, the original portion of the current Indiana University campus in Bloomington. The second building built on the new campus at Dunn's Woods, it was finished in 1885. Ground was broken on both Owen Hall and Wylie Hall at the same time, on April 2, 1884. Both buildings were designed by Indianapolis architect George W. Bunting. It was named after Colonel Richard Owen.

Owen Hall was originally built as a natural science building and museum. Many other departments have used it over the years. It is currently home to the College of Arts and Sciences administrative offices.

Owen Hall is also one of the few non-limestone buildings on campus.