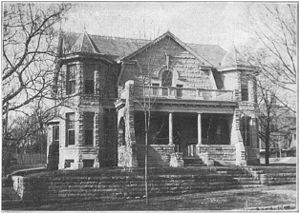 Myers Residence, from Souvenir of Bloomington, Indiana, published by the Commercial Club, 1912

The Batman House, 403 W. Fifth Street (1895) has also been attributed to J. L. Nichols, but there are no primary sources to support such an attribution, Nichols had not yet returned from his years in the western states when the house was designed and built, and the house bears no stylistic resemblance to anything he is known to have designed. The attribution is based on an assertion by an anonymous woman collected by a student in the IU folklore department.