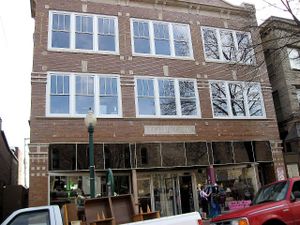 Front of the building

The Odd Fellows building at 108 East Kirkwood was originally built in 1913 as the home of a restaurant called the Henry & Kerr Bakery. In 1929 the Odd Fellows moved into the building. It was the second building for the Odd Fellows - in 1892 they had built the Old Odd Fellows Building that currently stands on 6th Street and Walnut Street.

Built in the arts-and-crafts style, the newer building has glazed brick on the facade instead of the more customary limestone and is on the National Historic Register of buildings.

In 2007, local developer Elliot Lewis renovated the building into a restaurant and upscale apartments, and small retailers Athena and Material Plane, who leased space in the building, had to move. In April of that year, the trustees of Cecelia Lodge #166 I.O.O.F. sold the building to the Upland Development Group of Bloomington for one million dollars. (1)