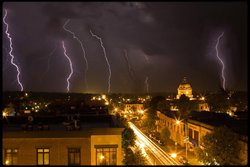 Walnut Street is a main north/south thoroughfare through Bloomington, as well as the dividing line between the west side and east side. It is a major road, carrying traffic to downtown from both north and south of the city. It once carried SR 37, before 37 was rerouted to the west side to be a 4-lane divided highway. In 2007 several Sharrows were applied to the right-most lane of Walnut Street in the vicinity of downtown; the intent of the Sharrows is to provide a safe lane for bicyclists to use while on Walnut.

Walnut is known as "Business 37" in its most extreme northern/southern areas. The northern "Business 37" runs from Walnut's northern terminus to Old State Road 37; it could also be argued that "Business 37" also goes to The Bypass. The southern spur arguably begins at either Rhorer Road or Fairfax Road, and heads south until it meets SR 37, where the road continues as the southern spur of Old SR 37.

Northern Terminus to the Bypass

Walnut Street begins at an interchange with SR 37 north of Bloomington. It heads south for 1.8 miles before meeting the northern spur of Old State Road 37, which can lead you to Griffy Lake, Lower Cascades, and Lake Lemon via Anderson Road. It continues south until it meets SR 46/SR 45 on The Bypass. This intersection is also the northern terminus of College Avenue.

After the 46 Bypass, Walnut splits in two; its southbound traffic now being carried on College Avenue. College runs one-way south for just over 2 miles until it reconnects with Walnut just south of downtown. Walnut, during these miles, is College's one-way north counterpart, handling northbound traffic. Both streets pass through Bloomington's downtown, and carry loads of traffic, including pedestrian traffic on their sidewalks.

Several restaurants had been on Walnut Street in the 1940's, when the RCA plant was at its peak. These included:

After Rhorer Road, Walnut continues south, just east of the small town of Clear Creek, which is mainly situated on Rogers Street, half a mile to the west. It passes Fairfax Road, a major thoroughfare to Lake Monroe (others being SR 37 and SR 446). Rogers also meets Walnut; it is a counterpart to Walnut servicing Clear Creek, Batchelor Middle School, Cook Pharmica, and Bloomington Hospital. After Rogers Street, it is not far to Walnut's official southern terminus at a stoplight on State Road 37. While Walnut Street meets its end here, the road on which it travels continues south as the southern spur of Old State Road 37. This road continues south, past the Starlite Drive-in movie theater and the small town of Harrodsburg.