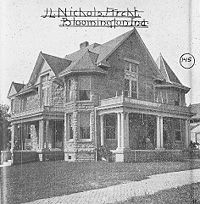 The Jefferson from Nichols' Album of Artistic Dwellings by John Nichols

The original house was designed by J. L. Nichols, Architect. It is featured in Nichols Album of Artistic Dwellings and is referred to as 'The Jefferson'. Harry Jefferson built the house on a budget of $7,000 in 1899. The walls were brick with stone veneer and the original roof was slate. Gas and electric lights and hot water heating were originally installed in the house. The house was later acquired by William N. Showers and leased to Phi Kappa Psi. When Phi Kappa Psi moved to their new house at 1022 East Third Street in about 1910, Sigma Nu purchased the house. In 1923 they engaged John Nichols to design an addition to the building. The general contract was awarded to Pickett and Gill Construction Co. of Lebanon, Indiana.