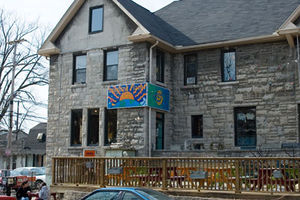 As seen from across the street.

Laughing Planet Café serves mostly quick-to-prepare, easy-to-take-with-you, and health-conscious foods. Whenever it is available, they use locally grown and organic produce. It is located on the corner of Kirkwood Avenue and Grant Street, in Kirkwood Manor, above the Soma Coffee House.

Freshly made, flavorful burritos are at the center of Laughing Planet's menu. The interior decor is colorful, and, among other sundry decorations features a set of colorful portraits of Frank Zappa by local artist Joel Washington.

The Laughing Planet is connected via staircase to Soma coffee house, which is under common ownership.

Richard Satnick started Laughing Planet Café with bicyclists and athletes in mind; the idea being to produce quick, healthy, and portable meals. In fact, their burritos were originally designed to fit in a bicycle's water bottle cage. Pete Smith sold it to Bob Costello in 2007.

The original Laughing Planet Cafe was started in Bloomington in 1995. A second location was opened in Portland, Oregon in 2000.

A review containing info on one of Laughing Planet's other locations

Review in the Louisville Courier-Journal from 1997