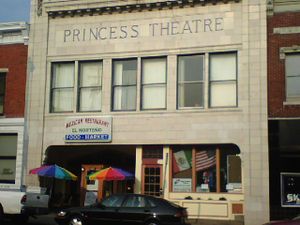 The Princess Theatre is an old classic theatre located at 206 N. Walnut Street, just 1 block north of the square. When Robert H. Harris built the theater in 1913 he employed the firm of Nichols & Nichols. The theatre was home to vaudeville shows and movies. Movies are no longer shown, but the "Princess Theatre" sign at the top of the front entrance still remains.

Harris also owned the Harris Grand. Due to competition from the newly built Indiana Theater, Harris hired John Nichols to remodel both theatres. In 1923 the size of the Princess Theatre auditorium was doubled; a boarding house and a shop on Sixth Street were demolished to clear the site for the expansion. The facade was redesigned using glazed terra cotta manufactured by the Indianapolis Terra Cotta Co. An early photo showing the Walnut Street facade can be viewed at the web site of the Monroe County History Center.

The Princess remained in business until 1981. Tom and Kathy Canada then bought the building, but their renovation plans ended when the auditorium addition collapsed in 1985. Developer Michael Pollack finally renovated it in 1986, and from 1987 to 1997 the theatre housed Leslie's Italian Villa. After that closed, the Princess Restaurant was in business until June of 2001.