Monroe County Civic Theater, a not-for-profit community theater, aims to bring quality theater to Monroe County and surrounding areas and to provide experience in all aspects of theater production to all interested persons. The curtain rose on MCCT's first production on September 12th, 1986. 2007 is their twenty-first season, which began with their ninety-ninth production.

They have performed at the Waldron Arts Center, the Bloomington Playwrights Project, Harmony School (outdoors and indoors), Karst Farm Park, the Monroe County Public Library auditorium, the Monroe County Historical Society Museum, Rhino's All-Ages Music Club, the Irish Lion, and various schools and health care centers in Monroe County, and have recently branched out to perform in Spencer and Brown County as well.

Shakespeare in the Park 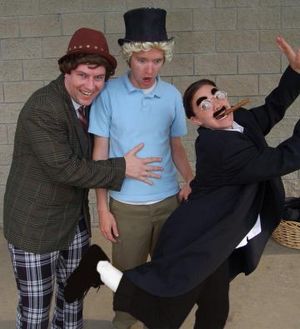 MCCT is perhaps best known for its Shakespeare in the Park series. It began in 1990 with a production of A Midsummer Night's Dream at Harmony School and in 1992 moved to Third Street Park's outdoor stage. Through 2009, they presented two Shakespeare productions each summer, one in June and one in September. Often, one of the two productions was done in traditional style, while the other was a more experimental show. However, in 2010 the schedule set by Parks and Recreation allowed only the June performance. This is expected to be a permanent change.

In 2009, the June show was A Shakespeare Sampler, short scenes from several of Shakespeare's plays directed by Phillip Addison; the September performance will be Othello, directed by Sheila Butler and Nate Stanger.

In 2010 the lone Shakespeare in the Park production was Henry VIII, directed by Denise Valkyrie. 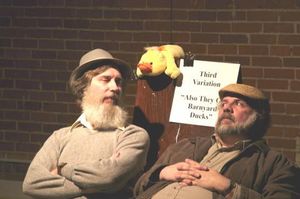 The Directors' Symposium was introduced in 1996 with the intent of allowing local talent to get their feet wet in the business of theater. It is presented as an evening of one-act plays, allowing people to experiment, act, produce, and otherwise "try out" theater without having to commit to a full-length show. Initially, this series was intended specifically for new directors, but recently it has been open to anyone, whether new or not. The selections for this annual Spring show have also been increasingly new, locally-written plays, adding another level to the experience. 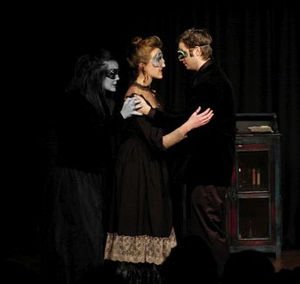 Dr. Jekyll speaks with his wife while Hyde "looks on".

In 2005, MCCT expanded their calendar to include a dinner theatre series in cooperation with the Irish Lion. These plays were initially performed upstairs at the Irish Lion and also at varying venues in Spencer, but have since branched out to other Bloomington venues as well. Although not always designed specifically to appeal to children, they are usually kid-safe in view of the family-oriented venues in which they are presented.

In 2008, the series consists of three shows. The first was Roy Sillings's adaptation of Lewis Carroll's Through the Looking-Glass, directed by David Nosko, in February and early March. The second show was Ruth Aaron Grove's adaptation of the classic fairy tale Little Red Riding Hood, directed by Hannah Moss, in May. Finally, in December, director Sheila Butler continued MCCT's annual tradition, Russell McGee's adaptation of A Christmas Carol by Charles Dickens.

The dinner theatre series has largely been dormant in 2009. The fifth annual production of A Christmas Carol is tentatively planned, but has not been scheduled for lack of a director or venue arrangements.

MCCT does not own a theater building or stage. Therefore, performances are in several different locations. Some organizations allow the Civic Theater to "borrow" space, at some locations space is rented, and at some locations shows are performed as co-productions with the owner of the venue.

Third Street Park is where the magic happens every June and September for Shakespeare in the Park. These shows are put on in association with Bloomington Parks and Recreation Department. This is an outdoor venue, so inclement weather may occasionally force a performance to be cancelled. Admission to all shows at this venue is free, though donations are accepted.

MCCT makes use of both the Rose Firebay and the Auditorium at the Waldron Arts Center. This is one of their most common venues. The Rose Firebay has housed the Directors' Symposium for several years. Ticket prices for this venue are currently set at $12 for general admission and $9 for students, although this occasionally varies depending on the show.

The Waldron is located at the corner of 4th Street and Walnut Street in Bloomington. The Rose Firebay is on the first floor, and the Auditorium is on the third floor.

Although MCCT has not had a performance at the Bloomington Playwrights Project in some time, they work in a spirit of cooperation with the group and may return to the BPP stage in the future.

The BPP is located on 9th Street between College Avenue and Walnut Street.

The current board of directors is:

The Board meets on the first Tuesday of every month at the Monroe County Public Library, unless otherwise noted on their Web site. Meetings are open to the public. Elections are held each January at the annual membership meeting.