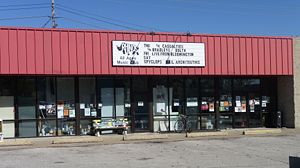 Rhino's is a division of Harmony Education Center and is located at 325 S. Walnut Street. The club boasts the Tom Donohue Memorial Stage among other amenities.

Rhino's is a venue for many different styles of music, including: punk, indie, hip-hop, rock, metal, and anyone else who wants to play there. Most of the shows are local bands, and the cover charge is usually $5-$10. Alcohol and tobacco are prohibited at the club. 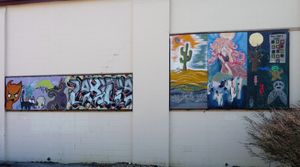 Art on the Bloomington Adult Community Center building next door

In addition to being a musical venue, Rhino's is also provides free after school activities including:

The club had previously been located at 4th Street and Walnut Street, but moved further south to create a larger capacity for shows and more space for the various youth activities.