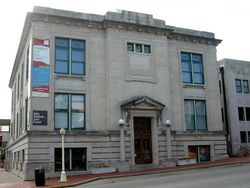 In early 2010 the BAAC made headlines and announced that it needed to raise $120,000 or it would be forced to close the Waldron. In March, the City of Bloomington bought the Waldron's assets from BAAC for $150,000. BAAC used this money to pay off its debt. An announcement of a new owner, Ivy Tech Community College, by the City of Bloomington ended a several-month-long saga about the building, its future and what role the building would play in Bloomington’s arts community. As part of Ivy Tech’s plan to take over ownership of the Waldron, the college agreed to pay the city $150,000 so it could refund the money it used to buy the Waldron from the arts council. Ivy Tech agreed to create and maintain at least 70 percent arts programming at the Waldron in an effort to preserve and cultivate the rich arts culture that Bloomington enjoys.

The Beaux Arts style building at the corner of Fourth and Walnut Streets was erected in 1915. Frank P. Riedel of Indianapolis was the design architect and George Weaver of Indianapolis was the general contractor. Riedel abandoned the project soon after construction of the exterior walls began, due to a conflict with Weaver about how the limestone facing was being attached to the brick walls. Local architect John Nichols was engaged to supervise construction after Riedel left, but there is no evidence that Riedel's original design was altered in any way.

The building was originally built for use as Bloomington's City Hall and served that function until 1965 when it was occupied by the Bloomington Police Department. The BPD moved out of the building in 1985, leaving it virtually vacant for five years. One tenant, the Bloomington Fire Department, used the south side of the 2nd floor as dormitory space for firefighters in the adjacent fire station.

After several failed attempts at the creation of an area arts center, the Bloomington Area Arts Council was finally able to raise the money necessary to renovate the old City Hall Building in 1990. The fundraising effort received a tremendous boost through the initially anonymous donation of $375,000 to the project by Cecile Waldron. In gratitude for the donation, the BAAC named the building after John Waldron, a prominent city politician in the 1800s and great-grandfather to Cecile Waldron's husband, Charles. The City of Bloomington handed over the deed to the property to the BAAC in a ceremony on July 31, 1990 at the Fountain Square atrium.

Space was also set aside to lease out to other arts projects. The city still owned the fire-truck bay attached to the building. The construction estimate was 12-15 months. At the time of the approval, the BAAC had raised $850,000 of the estimated $1 million it would take to complete the renovation and the first year of operation.

Construction got off to a rocky start when the revised renovation estimates came in at $190,000 more than was anticipated. The interior of the building was still filled with a generator, police files and a communications system from the Bloomington Police Department. The false celings were water stained and the roof needed repair work. While the Bloomington Fire Department still owned a portion of the building, there were also plans at the time to build a new fire station at the corner of Lincoln and Fourth Streets.

A later anonymous donation of $265,000 enabled the BAAC to purchase the adjacent fire station and dorm space after the city made it's intention to move the fire fighters to the new station known. The old fire station building, sold for $125,000, was constructed in 1950. Initial plans for the newly-acquired space called for the installation of Bloomington Community Radio, operators of WFHB in one portion, with administrative offices occupying the rest of the space. Funding for the new radio station was raised separately by BCB.

In early 1991, volunteers worked at cleaning out the center and holding various fundraisers to bridge the funding gap. They held their first open house on May 25, 1991. The nearly-finished building held its first official event, a silent auction, on May 2, 1992. Early reviews of the progress were encouraging as residents expressed their satisfaction with the result. The center was officially dedicated on October 4, 1992.