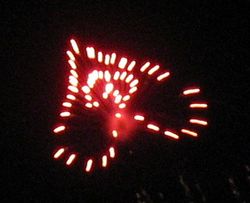 The official 4th of July Fireworks are usually held on the north side of the Memorial Stadium every year. It is visible for miles around and people park their cars all around the stadium and along State Road 46. Many people even sit in the walkway bridge over Highway 46. The event is sponsored by AMVETS and is one of the best fireworks displays in the state of Indiana.

In general, the fireworks can be seen from most of northern Bloomington, though there are some popular locations: