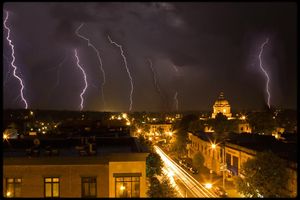 Walnut Center is the name of the complex of parking garage and retail space on the northeast corner of 7th and Walnut Streets. Opened in March of 2001, the complex has nearly four hundred parking spaces and 15,000 square feet of retail space, which is currently occupied by Scotty's Brewhouse, a tanning salon and an Indiana University souvenir shop. There is a telecommunications hub housed inside the garage that contains carrier equipment for the city and several major Bloomington Internet Service Providers.

The Downtown area was designated as "blighted" in 1985, which cleared the way for the city to redevelop certain areas. In 1998, the firm of Wininger Stolberg began working with the city to design plans for the new garage, and when the city began accepting requests for proposals the next year, they were the only firm to submit a bid.

In August of 1999, much of the land now under the center was transferred from the Bloomington Board of Public Works to the Bloomington Redevelopment Commission to take advantage of this. The next year, the city reached an agreement with Ameritech to take over a parking lot next door in return for 20 free parking spots in the new garage for a 20-year period.

The top several levels were initially open to public traffic, but were closed off to private parking a few years after the garage was built to discourage the dangerous driving habits of local teenagers who used the garage as a hangout. It was used as a cruising location for a short time after the old Regester Parking Garage closed in 2002.