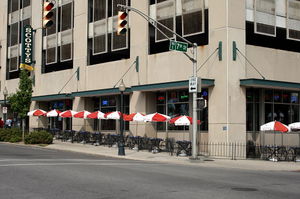 Scotty's Brewhouse was a restaurant and bar located in Walnut Center on the corner of Walnut Street and 7th Street at 302 N. Walnut Street. They had sitdown and barstool seating and many TVs tuned to sporting games and the news. It was a popular place to go during IU games.

Scotty's Brewhouse was a regional chain of college campus based restaurants. Bloomington was their second location, they also had locations in Muncie, West Lafayette and Indianapolis.

All Scotty's Brewhouse locations closed, and the Bloomington location closed on July 20,2019.