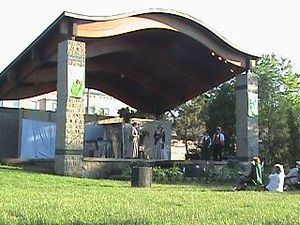 Scene from The Tempest in the 3rd Street Park pavilion

The Waldron, Hill and Buskirk Park, formally known as The Third Street Park, is located behind the Bloomington Police Headquarters at 331 S. Washington Street in downtown Bloomington. It is situated on 3.5 acres of land between Washington Street and Lincoln Street. The park boasts a large playground area with equipment along the east side as well as the Allison-Jukebox Community Center along the west side. The park also contains a fountain and covered band stand. The band stand has played host to Shakespeare in the Park by the Monroe County Civic Theater for many years. There is a plaque in the park honoring the Buskirk, Waldron, and Hill families, all of whom donated land between 1923 and 1963.

The park is a frequent trip for the children at the Boys and Girls Club, which is located across the street. 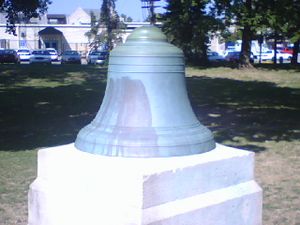 A wagon spoke factory owned by Howe Ryors was originally on the location. Built in 1875, the factory deteriorated after its closing, and in 1923 Hays Buskirk donated the property for a city park. Five years later, W.H. Adams donated the swimming pool in memory of his daughter Emma Jane. The bathhouse was replaced in 1934, possibly due to the heat of the planks leading between it and the pool.

The bandstand was also created in 1928, and Bloomington High School band director Carl Frye conducted many popular concerts in the 1940's and 1950's.

By 1968, the pool had become leaky and expensive to maintain, and it was demolished.

The fountain was made by the Seward Foundry in 1895 and was renovated and installed in its current site in 1991. In 1999, mosaic tiles were added.

In its 70-year history, the park has played host to national horseshoe competitions, and at one point, had a rule against playing cards.