The Nomad Buffet, located on the northeast corner of N. Walnut and 17th Street, was a restaurant offering a selection of different central and east Asian cuisine. Though the ownership and management of the restaurant was Tibetan, the buffet menu offers different Asian fare in comparison to the other Tibetan restaurants in town, notably specializing in prime rib. Some regulars to the restaurant had begun shortening the name to simply "The Nomad."

The restaurant was opened in December of 2006 by Pema, a resident of Bloomington, with the help of other local Tibetan friends. Much of the remodeling of the interior, which had been inherited from the American Chopstick, was undertaken personally. Shakya, with previous experience in restaurant management, was charged with overseeing much of the new construction. Pema, who brought expertise as a restauranteur in Orlando, Florida, invested the start-up capital needed for the remodeling.

Pema left Tibet in 1989 as a refugee, arriving in India. He later came to America in 1998 and began work in the restaurant business shortly thereafter. Pema originally came to Bloomington at the beginning of 2006 to help the Tibetan Cultural Center. After a couple months of living in Bloomington, Pema decided to make it his home and set out to start a restaurant.

Unfortunately, much like previous business ventures at this location, The Nomad has gone out of business and thus, closed its doors. A korean restaurant, Shin's Family Restaurant has since opened in the same location. 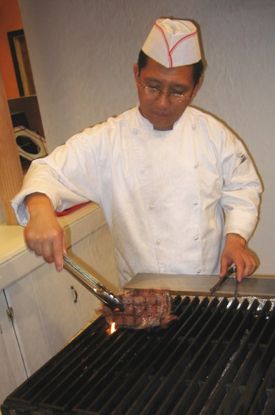 Fountain soda, coffee, and tea is available for a dollar each (free refills).

A promo posted in The Ryder (Jan. 2007) mentioned that a patron can eat free on their birthday provided they bring at least one friend.

The menu items included an assortment of Tibetan, Chinese, Japanese, and American dishes. The owner asserted that food was always prepared fresh each day. On the west side of the food area, two buffet tables offered items such as dumplings, broccoli, potatoes, rice, salad, bread, and soup. On the east side, there was sushi available and a large barbecue area where the staff would barbecue prime rib and other meat, noodle, and vegetable selections.

The Nomad restaurant could seat around a hundred people, including a back room which could seat around thirty for group meetings or parties. Parking spaces, however, could be sparse if the restaurant is busy. The ownership was looking into avenues to expand parking, especially during lunch hours when local business folk frequent the Nomad. 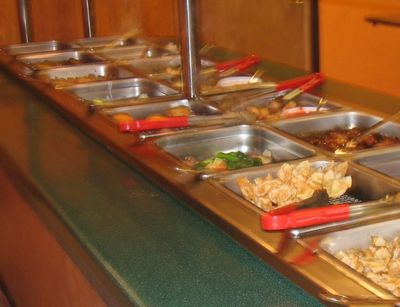 One of the buffet tables

At the end of 2006, the City of Bloomington was considering the development of new apartment complexes and urban renewal projects in the immediate area of the Nomad restaurant. Though it may have taken some time to happen, the Nomad ownership estimated that this could either have been a boon for their business, or a bane forcing them to relocate.

The ownership was hoping to expand the nomadic theme of the restaurant decor with photos of Tibet and Mongolia, or even emblems of nomadic life, such as horse saddles. In late 2006, the Nomad participated in a prepackaged mailer advertisement.