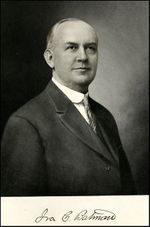 A Monroe County or Lawrence County native, he attended the state university for a year before studying law for a year at the office of Buskirk & Duncan in Bloomington. He received his law degree in 1885.

He served two terms as judge of the Indiana Appellate Court from 1916 to 1924.

Batman served as attorney for the city of Bloomington for thirteen years and was county attorney for two years. In 1905 he was elected to the state legislature. He was also vice president of the First National Bank and served on the board of directors for that enterprise and also the Citizens Loan and Trust Company.

In 1888 Batman married the former Mary T. Waldron, the daughter of John Waldron, Sr., and they had one child, Emma (Batman) Riley.

The Ira C. Batman Faculty Fellowships were established in 1983 by the Emma B. Riley Charitable Trust, providing for the fellowships to be named in honor of her father.