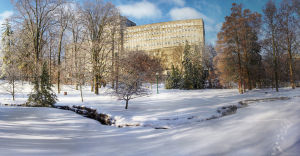 Ballantine Hall is a ten-story building used primarily for classrooms and offices. It was completed in 1959 at a cost of $6,242,422. At the time it was finished, it set a record as the largest academic building in the world. Because of the high cost, the building went without air conditioning for its first 18 years.

Named for Elisha Ballantine, who first taught at IU in 1854, Ballantine Hall was built at the north end of Forest Place sub-division (photo), where several houses used by fraternities, sororities, and as general boardinghouses were located, including Alpha Hall.

The globe six-foot in diameter that is perched in the foyer of the first floor was donated by two alumni in 1961.

Ballantine hall is the tallest IU campus building, and has an unfortunate history of suicides. In 2004, a student leapt from the 8th floor and survived.