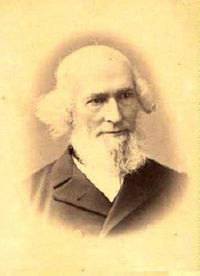 Elisha Ballantine (b. October 11, 1809, d. April 20, 1886) was a professor at Indiana University and is who Ballantine Hall is named after. He first taught at IU in 1854 and was the acting president of Indiana University in 1884 inbetween the 6th president Lemuel Moss and the 7th David Starr Jordan. He was vice president of IU from 1884 to 1886. He was married to Betsy Ann Watkins from Prince Edward County, Virginia, with whom he had 7 children.

He taught math and ancient modern language. He was later chair of the languages department.

Elisha was one of the professors who seemed to oppose Sarah Parke Morrison (first female student at IU) as a student. Interestingly his son, William Gay Ballantine was president of Oberlin College in Ohio [1], which was the first college to admit (1837) and graduate (1841) female students.

Ballantine graduated from Ohio University, Athens, Ohio, in 1828. He studied theology at Union Theological Seminary, Hampden-Sidney, Virginia, and at Halle in Berlin, Germany.