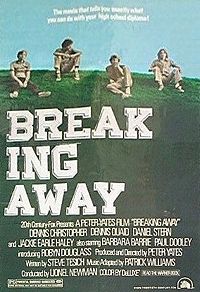 Breaking Away is the title of a 1979 film about The Little 500 bicycle race at Indiana University in Bloomington. It was directed by Peter Yates and written by Steve Tesich. It stars Dennis Christopher, Dennis Quaid, Daniel Stern, Jackie Earle Haley, Barbara Barrie and Paul Dooley. It won the Academy Award for Writing Original Screenplay, and was nominated for Best Actress in a Supporting Role (Barbara Barrie), Best Director, Best Music, Original Song Score and Its Adaptation or Best Adaptation Score and Best Picture.

The film was filmed in Bloomington and features many notable landmarks and locations including the IU Main Library, the IMU, the Musical Arts Center and the Delta Delta Delta house on 3rd Street.

There was a 20th anniversary showing and event of Breaking Away at the Buskirk-Chumley Theater on April 23, 1999. It featured an appearance by actor Dennis Christopher and others. A more amusing part about watching it in the Buskirk-Chumley at this event was that in the movie, the actors walk up Kirkwood Avenue right next to the theatre it was being watched in. The audience watching the movie just let out a collective "Hmmm" when this happened.