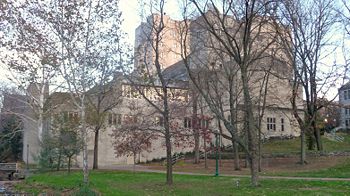 IMU as seen from Dunn Meadow

The Indiana Memorial Union, commonly called the Union or the IMU, is the student union for Indiana University. The IMU is located on 7th Street in the heart of campus. It is west of Beck Chapel and Dunn Cemetery. It was originally established in 1909 by then student John Whittenberger and IU President William Lowe Bryan.

Currently it is the second largest student union building in the United States, and one of the largest in the world. It is notable that it is a mere 11 square feet larger than the Student Union at Purdue University in West Lafayette, Indiana. Some people, as well as Indiana University, consider the IMU the largest if you consider that the student union at Oklahoma State University doubles as a student government building, which is considered unusual.

It is one of the biggest buildings in Bloomington. It's a 500,000-square-foot, seven-story tall limestone building. It's a very popular place for students to go to study, relax, eat, bowl, watch a movie, and even to shop. Many official IU activities and events take place at the Union.

One can study anywhere in the Union. It is a common meeting place both informally and formally with areas to hang out with friends as well as many meeting rooms that can be reserved for planned events. There is wireless Internet access in many parts of the building.

There are many comfortable sofas and chairs on the mezzanine level above the hotel lobby in the East Lounge. On school days, you will often find it packed with students: some sleeping, some reading, some watching others walk by. This area is also a common place to take pictures when it is empty as the lighting and background is ideal for formal pictures

East side of the IMU by Kagan Tuncay.

For those that are hungry, there are fast food restaurants such as Burger King, Dunn Meadow Cafe and a bakery, all located on the north side of the building. If you have no money in your pocket, you don't have to worry about that either if you have your bank card because the IU Credit Union has a branch on the premises located next to the hotel lobby. The restaurants now also take Campus Access cards.

A popular place for entertainment in the Union is the Back Alley. They have bowling, pool, video games, food and drinks.

You can also watch a movie at the Whittenberger Auditorium while you’re eating a snack or drinking a drink by the TV area in the Union. Its free to those with a student ID and $2 for people who don't. The movies shown there are usually new releases 6 months or so after being released in other theaters. Sometimes they show older movies too.

The Indiana Memorial Union building as originally designed by the Chicago firm of Granger & Bollenbacher was less than half its current size. It was one of three structures built to commerate the casualties of World War One. The other two where the original Memorial Stadium on Tenth Street and Memorial Hall. Over the years there has been one major addition to the Union and several smaller ones. The largest was the Biddle Continuation Center, designed by the New York firm of Eggers and Higgins, Supervising Architects and Indianapolis architect Edward D. James, Associate Architect. Roughly speaking, the Biddle Continutation Center is the eastern half of the building.

The IMU is home to many and varied resources for use by students, faculty, staff, and visitors. These include: