Yogi's was a sports bar located at 519 E. 10th Street (the corner of 10th Street and Indiana Avenue) in Bloomington. It was opened in September of 1992 when BW3's vacated its position in a move to Kirkwood Avenue. The owner, Jim Karl is a big fan of baseball player Yogi Berra. The restaurant was named for him, Yogi the Bear, and Karl's cat, Yogi. It boasted a full-service bar, a gameroom (billiards, darts, video games) and a covered outdoor patio. There was limited parking, but visitors who arrive after 5PM can use a nearby Indiana University parking lot.

In 2019, they announced they would be reopening later that year at the former Scotty's Brewhouse location at 302 N. Walnut Street. 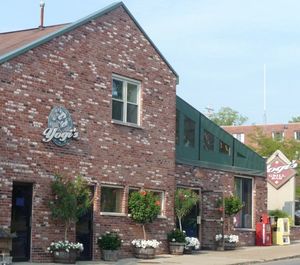