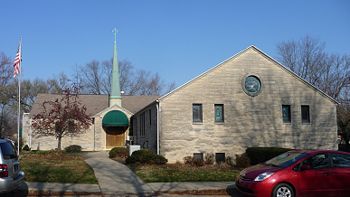 The United Presbyterian Church at 2nd Street and Eastside Street is a diverse congregation boasting members from many nations. As a reformed congregation, they believe in the authority of Scripture and the elemental Presbyterian confession that "God alone is Lord of the conscience."

In 1834, another sect of Presbyterians formed the Associate Presbyterian Church. They worshipped in a log church southeast of Bloomington until eventually building a frame church on east 2nd Street in 1839. In 1863 two congregations merged into one, worshipping at a church on 8th Street, and in 1869 the ARP merged with these two, forming a total congregation size of 212. The wood frame church on 9th Street was replaced with a larger brick building, and in 1871 William McNary was named pastor, a position he retained for 13 years.

In 1885 the Reverend Samuel Ross Lyons became pastor. A native of South Carolina, Mr. Lyons came to the congregation from Marissa, IL. In 1892 he was also elected a member of Board of Trustees of Indiana University. He remained pastor for at least eleven years but at some point moved to Richmond, IN, to become pastor there. He died in 1915.

The Rev. Vincent Strigas became the church's full-time minister in 1951. That same year, on July 3rd, 1951 faulty wiring in the church led to a major fire, and the congregation built a new church (designed by local architect William J. Strain) at the corner of 2nd Street and Eastside Drive. In 1970 an addition was added to the building.

In 1976, pastor Faris resigned to form the Evangelical Community Church, and a majority of the congregation followed him there. Difficult years followed until 1992, when pastor Bremer began his term. Bremer returned stability and growth to the church.

White Oak Cemetery was known as the United Presbyterian Cemetery until 1983.