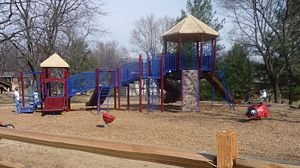 Park Ridge East Park is a nice little park to kill an hour or two with the kids. The playground equipment was replaced in 2008. Although there are very nice tennis courts, a basketball court, and a softball field at the park, it's rare for more than a few people to be present at one time, mostly nearby residents. The park is a well-kept secret, but very accessible to anyone who regularly drives up or down Smith Road between Third Street and Tenth Street.

The park consists of 4.5 acres on Morningside Drive in the Park Ridge East subdivision.

The shelter house is not reservable.

Take 3rd Street east to Smith Road. Turn left and take the first right onto Morningside Drive. Drive straight through the subdivision and you will see the park on the left.