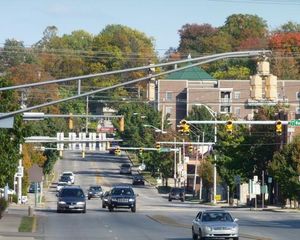 Third Street is the main East-West street on the southern border of the Indiana University campus. It's a two-way street from the 45/46 Bypass to S. Mitchell Street. It becomes one way, in the west-bound direction, until Dunn Street; during this leg of one way westbound status, Atwater Avenue runs one way eastbound to provide bilateral traffic flow.

3rd Street then continues through town until it eventually intersects State Road 37. When 3rd Street crosses Rogers Street, it enters the Prospect Hill neighborhood and eventually terminates into a "T" intersection with Patterson Drive near the Rose Hill Cemetery. Rather than travel through the neighborhood, most people head north on Rogers to catch West 5th Street (Kirkwood Avenue east of College Avenue), which bypasses Prospect Hill and the cemetery to rejoin with 3rd Street on the other side of the neighborhood. After Prospect Hill, it becomes a major road once again and continues west for about 1.25 miles until an interchange with SR 37 where it becomes SR 48 and continues on past the Whitehall Crossing shopping center and Curry Pike. 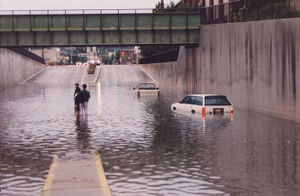 By the Bloomington Convention Center downtown, by Andrew Stoeckley.

This is an old video from 2007 of traveling from the west side where 3rd street curves around and turns into Kirkwood Avenue.