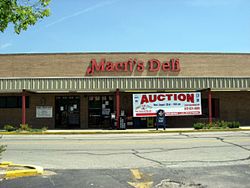 2 weeks after it closed

Macri's Deli was a sit down restaurant with two incarnations: one near College mall, and a more recent one in downtown Bloomington. The downtown location opened in 2012 in the old Illinois Central depot. It was a resurrection of a popular restaurant in Jackson Creek Shopping Center that closed in 2007. It closed in 2015.

Jerry Hinnefeld and Troy Donovan, the owners, purchased the name and recipes from the previous Macri's owners, and some of the booths are replicas of the originals.

The menu included the Old Chicago sandwich, the Donovan Sandwich, and homemade ice cream. There was also a full bar and 34-ounce beer mugs, another trademark feature of the old restaurant.

The restaurant used to have a second location on north College Avenue, near the current Miller-Showers Park.

Other locations are in operation. Mishawaka, Indiana, and South Bend, Indiana each have a Macri's.

The Jackson Creek Macri's was owned by Jeff Badalich. On July 30th, 2007 a sign was posted on the front door that said "Macri's will be closing at 6PM". According to employees at the restaurant, the manager returned from a meeting and closed the store down with no warning. Current customers were given to-go boxes for their food and the staff was instructed to leave. The sign remained in place through the weekend, and the restaurant remained closed. The Herald Times did some investigation on Monday, August 3rd and was eventually able to determine that they weren't able to agree on new terms with the owner of the property they lease from. This was not the complete story.

The owner had known that the lease would not be renewed; Kroger was planning on expanding. He had accepted a position out of town, but planned on continuing the business through the end of the lease. The bank, upon hearing that the owner would not be involved in the daily management, froze all the owner's assets making it impossible to continue. The owner worked very hard to make sure that all the employees were paid their wages. Two weeks after the restaurant closed, all of its assets were liquidated in an auction.