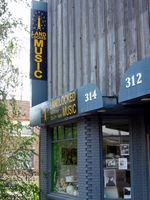 Landlocked is a locally owned record store on South Walnut Avenue in downtown Bloomington. It was opened on March 3rd, 2006 at 314 South Washington. The following week featured an opening party with the The Impossible Shapes. The store has an extensive vinyl selection as well as new/used CDs.

Landlocked Music closed their old location at 314 S. Washington at the end of June, 2008 and re-opened at 202 N. Walnut Ave on July 8, 2008. Bloomington Transit bought their former building with plans on building the new city bus terminal at the location. They moved to 115 S. Walnut in January, 2019.