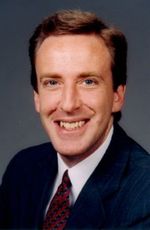 Mark Kruzan is the former Mayor of Bloomington, Indiana. He was born in Hammond, Indiana, on April 11, 1960, to Richard and Dolores Kruzan. He has one sister, Karen.

Kruzan was elected as state representative for Bloomington in 1986. He was appointed to be the house minority whip in 1994 and elected by his colleagues to be the majority leader of the Indiana House of Representatives in 1996. He served in that capacity until 2002, when he decided not to run for re-election in anticipation of entering the 2003 race for mayor of Bloomington.

As District 61's representative, Kruzan served on the Environmental Policy Commission (1987-1996), the Environmental Quality Service Council (1994-2000), and the Judiciary Committee (1989-1996). He was also a member of the Legislative Council from 1991-1995 and from 1996-2002. Additionally, Kruzan supported legislative measures addressing home health care programs, AFDC assistance to families where parents were underemployed, the protection of the property rights of widows and divorcees, support for "at work daycare centers for women," and animal welfare issues. (House Resolution, Second Regular Session 112th General Assembly, 2002.)

Kruzan was the recipient of numerous awards during his 16-year tenure in the Indiana House of Representatives, including, among others, the Indiana Insurance Institute Legislator of the Year in 1997, Indiana Department of Environmental Management Environmental Impact Award in 1996, Friend of the Child Prevent Child Abuse in Indiana in 2001, and ARC of Indiana Legislative Award in 1999. (Id.)

On April 22, 2006, Kruzan was honored as the recipient of the Thomas J. Hennessy Award, "presented every two years to an IU alumnus in recognition of outstandng achievement in professional endeavors or public service... ." (Residence Halls, Vol. 14, Fall 2005.)

Kruzan married Amy Brown in 2002. He was elected mayor in November 2003, and took office in January 2004. He and his wife separated in the summer of 2004 and were subsequently divorced.

Kruzan was re-elected as the Mayor of Bloomington on November 6th, 2007. His opponent, David Sabbagh conceded at 8 PM Eastern on election day. (The Herald-Times Online, Nov 6, 2007.)

In October of 1993, Kruzan was arrested for theft and residential entry -- both Class D felonies -- after using a key to enter, without her consent, the apartment of a woman he had been dating, Debora Frazier. In a series of newspaper articles published in The Herald-Times from October 4, 1993, through October 6, 1993, Kruzan made numerous comments and statements to the paper attempting to explain his reasons for entering the apartment without permission from his former girlfriend and for stealing items he had previously given to her. According to a police affidavit, Kruzan also made a statement admitting to removing a screen from the former girlfriend's window "to make her feel 'uneasy and nervous.'" (The Herald-Times, Oct. 5, 1993.)

In a statement read to the editor of the The Herald-Times, Kruzan stated that: "'I deeply regret that it has gone this far. At no time was there intent on either party's part to hurt the other....This incident is the unfortunate product of a long and tumultuous relationship that has involved pain for everyone concerned....I'm embarrassed that an essentially private matter has escalated to this level. My great hope is that some sort of understanding can be achieved by all involved....I'm very aware the public perception will be bad. In my case it will be 'another politician in trouble.' But I have to put personal stakes above political to help both myself and her.'" (The Herald-Times, Oct. 4, 1993.)

Kruzan denied "having emotional problems" and stated that he was "not seeking psychological counseling." (The Herald-Times, Oct. 4, 1993.)

Subsequent to Kruzan's arrest, the Monroe County prosecutor decided to bring Kruzan's case before a grand jury. Shortly thereafter, Kruzan's former girlfriend approached the prosecutor "to ask for a solution that would avoid criminal prosecution of Kruzan." She stated that she had initially pressed charges "'in order to ensure my own safety and out of concern for Mark's mental health.'" Kruzan entered into an agreement, "titled Withheld Prosecution Agreement," which listed eight conditions with which Kruzan agreed to comply, including an acknowledgement of "responsibility" for his actions, an expression of "remorse for creating in her uneasiness, fear and anxiety," and an agreement to undergo counseling. (The Herald-Times, Oct. 6, 1998)

Kruzan did not publicly apologize for his behavior until ten years later, in October, 2003, while campaigning as a candidate for the Bloomington mayor's office. 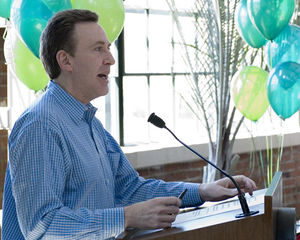