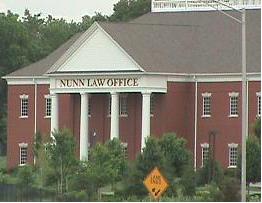 Ken Nunn is a well known attorney in Bloomington. He has advertised his services as an injury lawyer on the back of phone books as well as in TV commercials for many years. He is a 1967 alumnus of the Indiana University School of Law. His practice was originally located in the Nunn Building on south College Avenue behind Fountain Square Mall. The current location of his practice is at 104 S. Franklin Rd., Bloomington, IN 47404.