The Kathryn Janeway Birthplace Monument is a bronze bust on a limestone base statue located on the B-Line Trail. It was unveiled during a public ceremony that was live streamed on October 24th, 2020. 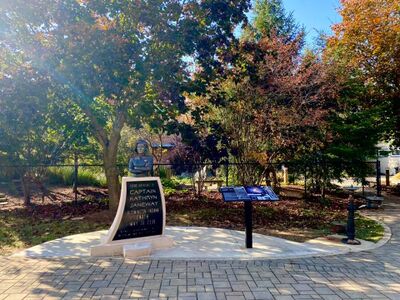 Since the original airing of Star Trek: Voyager, there have been several attempts by residents of Bloomington, Indiana to erect a monument honoring Kathryn Janeway without success.

Three disconnected groups of Bloomington, Indiana residents were attempting to make a Kathryn Janeway Monument. One group, a husband and wife team made it their goal after participating in Star Trek the Cruise III. They called their group The Janeway Collective, and added two other individuals to help their mission. In 2017, A professor at Indiana University made a Facebook group in order to find other like-minded individuals interested in creating a commemorative plaque. The last group formed on reddit in the sub-reddit /r/bloomington. They held a meeting at a local coffee shop which was attended by a handful of redditors and a member of the city council

The first public announcement of the groups work was published in The Herald-Times on May 19th, 2019. The article explains the combination of these groups, and their intentions to create a monument.

In the very beginning, outreach and fundraising were done together through setting up at local artist outlets and small community festivals, with a table that included custom made handbills with a donation basket. A custom made photo stand-in of Janeway was donated to the group by a local artist, was used to draw attention to the project. With a newly joined photographer/web designer, a domain name and website was then launched.

A fiscal partnership deal was struck with Artisan Alley, an artist incubator non-profit. To assist with grant proposals, connection with artists in different mediums and other areas which may be helpful to ensure the completion of the monument.

The original design concept was a simple limestone bench with inscriptions about Janeway, her date of birth, Star Trek and coffee. 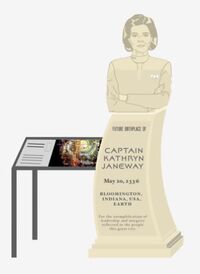 Leaving the bench idea, the design was transformed into an all limestone statue including a bust. Afterwards an informational table was added, supported by the monument itself.

The essence of the second design was kept with additions to further enhance the lifespan of the statue The bust was changed to bronze. The base was transformed into a delta shape, sitting atop a cut piece of limestone in the shape of a Voyager era communicator. A stainless steel plate was used in a recess opposed to having information chiseled out of the limestone itself. A United Federation of Planets logo was added to the base opposite the metal plate.

Describes the character of Janeway, Jeri Taylor and journey of the USS Voyager.

The Janeway Collective successfully raised funds through a crowdsourcing campaign on the platform Patronicity and received a matching grant from the Indiana Housing and Community Development Authority's CreatINg Places program. Indiana University also awarded a grant for the project. A licensed, limited run of numbered bronze communicator badges were cast from the same bronze as the bust were given with donations to the monument's maintenance fund.

The official groundbreaking event took place on June 27, 2020 with the entirety of the Janeway Collective participating.

A public ceremony was held at 11am EST on October 24th, 2020 to unveil the monument, which was simulcast on Facebook Live. The speakers in attendance were Susan Sandberg with the Bloomington City Council, Peter and Mary Beth Kaczmarczyk, Mary Ann Macklin, Adam Nahas of Artisan Alley and the bust sculptor Aaron Eby. Melissa Kocias was the master of ceremonies. Kate Mulgrew attended virtually through a Zoom conference. A video of supporters including Robert Picardo was played, with a behind the scenes video showing the creation of the monument. The day of the event, the live stream statistics showed a total view number of 16,100. Other events that coincided with the unveiling included a "Science of Star Trek" virtual event hosted by the nearby children's science museum Wonderlab Museum of Science, Health & Technology, and a Star Trek themed service by the Unitarian Universalist Church of Bloomington.