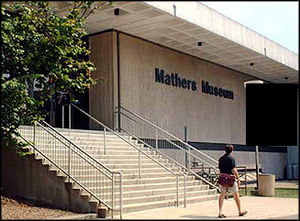 The Mathers viewed from the sidewalk

The Mathers Museum of World Cultures is Indiana University's museum of ethnology, ethnography, and cultural history. Continously accredited by the American Alliance of Museums since 1971, the Museum is dedicated to preserving and promoting knowledge of the world’s cultures, past and present.

The Mathers Museum was formally organized as the Indiana University Museum in 1963, but a forerunner of the institution can be traced back almost a century earlier. In the 1870s the University purchased the cabinets of Dr. David Dale Owen, a former Indiana state geologist. These cabinets, extensive geological collections, were placed with natural history and zoological collections in the Scientific and Law Building on the old campus (now Seminary Square Park).

In July of 1883, a fire destroyed the building, and the collections were lost. Following the disaster the Bloomington community donated funds toward the building of Owen Hall, located on the new site chosen for IU’s campus. Owen Hall housed a new natural history collection and a small exhibit space. By the turn of the century, Ulysses Grant Weatherly, the head of the Department of Economics and Social Sciences, attempted to organize a museum of anthropology and history. Presumably, the collections that he catalogued and exhibited were departmental acquisitions, but very little is known about the collections. One artifact currently held by the Mathers Museum (a grist mill) may be traceable to Weatherly’s holdings.

In 1914, the University purchased a collection of Indiana pioneer implements. These materials had been collected by Warder W. Stevens, who’d hoped to organize a history museum on the IU campus. Logan Esarey, an assistant professor of history, arrived on the campus around the same time, with much the same idea. Esarey struggled for years to establish a museum on campus, using the Stevens collection as a nucleus for exhibits and research. However, upon Esarey’s death in 1941, the Stevens collection was placed in storage in the attic of the Main Library (now the Franklin Student Center).

The first officially acknowledged museum on campus opened its doors in 1943. Under the guidance of Georg K. Neumann the museum exhibited a wide range of materials, including objects collected by Eli Lilly and Glenn A. Black at Angel Mounds, ethnomusicological materials, and busts from the Columbian Exposition. For the next 20 years the museum would continue to grow under Neumann’s and later, William Adams’ directorships. But although the collections were increasing, and exhibits were presented to the public, the Museum was not formally chartered by Indiana University.

Finally, after much urging by faculty from the Department of Anthropology and other university administrators, the Indiana University Museum was chartered under the directorship of Wesley R. Hurt, in 1963. The institution began with a few rooms in Maxwell Hall, and an assemblage of collections from throughout the campus. The anthropology collections of Neumann and Adams, as well as the historical collections of Esarey and Stevens, were placed under the new museum’s care, and the Indiana University museum was designated as a museum of anthropology, history, and folklore.

In December 1965, the Museum opened its first exhibit, Indiana’s Vanishing Industries, drawing upon the Stevens-Esarey collections. By 1970, the Museum’s collections and exhibits had expanded to the point that a move into a new building was necessary. Its new location was in the former Student Building (now housing the geography and anthropology departments). Improved facilities and additional storage and exhibition space led the Museum staff to apply for accreditation by the American Association of Museums. Accreditation was awarded to the Museum in July 1971.

Ten years later the Museum prepared for a new home. In October 1980, the groundbreaking ceremony was held for the William Hammond Mathers Museum--the institution being renamed in honor of the youngest son of Dr. Frank C. Mathers. Dr. Mathers, a chemistry professor at IU, was the principal building fund donor for the new facility. In April of 1983, the building was dedicated, and for the first time, the institution’s collections and exhibits were housed in a facility specifically designed for museum purposes. The Museum’s adjoining administrative offices were housed in the former Delta Tau Delta fraternity.

In July 1983, Dr. Geoffrey W. Conrad accepted the directorship of the William Hammond Mathers Museum, and oversaw an expansion of museum programming and exhibits. Conrad retired in 2012, and in 2013, Dr. Jason Baird Jackson was named director of the Mathers Museum of World Cultures, as the institution began its 50th year.