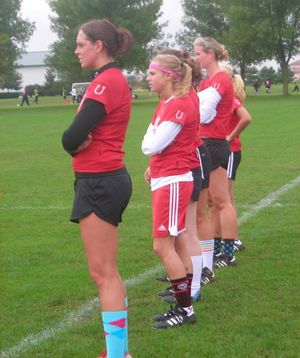 The IU Women's Ultimate Frisbee team, named Calamity Jane, practices Monday and Wednesday from 5:30-8:30 at Woodlawn Field. They also practice on Sundays at Jordan Field from 10-1. The 2007 - 2008 captains are Laura Jones and Juliette McNamara.

Calamity Jane ultimate started in the fall of 1992. Prior to 1992, women's ultimate in Bloomington was little more than an irregular offshoot of the IU men's ultimate team, Hoosiermama?. Dissatisfied with the lack of organization and unpredictability of the existing women's ultimate scene, three women, Dorothy Payne, Lisa Meeden and Laura Farmer, decided to form a new women's team, completely independent of the men.

From the start, Calamity Jane was a success. In the first year, the new team went to college Nationals in Bethlehem, PA, making it all the way to the quarterfinals. By the Janes' second year, their ranking had shot up to third in the country, when they went to Nationals in Baton Rouge, LA and progressed to the semifinals. The following year was a time of team rebuilding. Several veteran Janes had left, yet the team returned to Nationals for the third year. This time in Champagne/Urbana, IL, the weakened Janes suffered defeat early in the tournament.

The team's fourth year saw a major change in team structure, when they voted to have a team coach, Bob Flynn. With their minds free to focus on their game rather than on coaching and organizing, the Janes again went to Nationals. In Minneapolis, MN, the Janes made it as far as the quarterfinals where they finished their season ranked number five.

With only four returning players in 1996, the Janes had their work cut out for them in again building up a team. Although many promising new players joined the team for the 1996/97 season, the Janes lost the qualifying game at Regionals and, for the first time in Janes history, did not go to college Nationals.

The 1997 - 1998 team, still under coach Bob Flynn, avenged their losses. They stormed through the season winning several tournaments and beating most of the Sectional teams. At the Sectional tournament, they were shocked to lose to Notre Dame, placing second. They regrouped, however, and headed off for Regionals in the cold and wind of Michigan. In the semi-finals and the game to qualify for Nationals, the Janes were up against Wisconsin. With the support of the Hoosiermama? men, watching on the sideline in blankets and raincoats, the Janes scored an up-winder to go to Nationals. Afterwards, they still had to play Carleton in the finals for Nationals seeding. The weather was so terrible that Coach Bob put in all the rookies - there was no way they could win against Carleton - and let all of the exhausted players from the semifinals game go change into dry clothes and watch. They played Nationals in Blaine, MN and between the thunderstorms, managed to win one or two games.

In 1998, Calamity Jane pulled out all the stops in her recruiting efforts and had quite a promising company of women. The new recruits were fast learners and were gritty, tough competitors. When numbers began to dwindle in mid spring, it would have been easy to give up the ghost, but their feisty spirit led them to show up at tourneys with as few as 5 players. Bob retired from coaching to concentrate on teaching his newborn daughter to throw and catch, and the Janes called upon another veteran member of the Ultimate community, Ben Barbera, to help them out. Although this squad did not make Nationals, a new core was instilled with a love of competitive Ultimate that has spread to the Janes of the present. 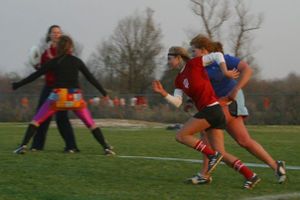 Dena Slattery making a cut for Lindsay Cunningham at the Mardi Gras tournament in Baton Rogue in 2007.

1999 - 2000 was yet another building year for the Janes. The focus was again on recruiting, and this time, newcomers were here to stay. The team was led by the spirited duo of Sarah Lima and Kim Wysong. Without a coach, these fine women had to manage the triple task of teaching the rookies basic skills, developing their own game, and fostering a spirit of camaraderie and dedication that would turn a dozen different women into one unified team. By April, however, the team had learned to play together. Newer players found confidence as the disc started dropping into their hands more regularly. Veterans could now step up their performance and play more effectively, as the bewildered rookies had become reliable teammates. Highlights of the 99-00 season included the Janes' first gutty, scrappy win at Arctic Vogue, and a strong friendship with each other and with the Hoosiermama? men. The millennium Janes were just happy being a team, and had little aspirations of making it to Nationals.

The Janes' ninth season started in a most unprecedented way. There were so many Janes! Sarah and Kim continued to lead the 2000-2001 team, joined by a strong set of ex-rookies-turned-diehard-ultimate-lovers from the year before. Plus, there were stacks and stacks of new rookies! After years of looking longingly across the practice fields at the men's team with their huge numbers, the Janes proudly took two squads, Cream and Crimson, to the fall Purdue tournament. In the spring, the Janes were pleased to let Sarah and Kim go back to captaining while their new coach, Jason Flock, brought experience and stability to the Janes. His savvy led the team to regain their old competitiveness, with a 4th/5th place Regionals finish. It was the highest the Janes had achieved in three years, and yet there was still some disappointment, as the squad had hoped to qualify for Nationals. Despite such feelings, however, this group found a unique love for both Ultimate and each other in the midst of all of that sweat, pain, and dirt.

The year 2001 - 2002 started out hard and fast and continued that way. The rookies were serious athletes and picked up quickly. Ben Barbera agreed to a second stint at coaching Calamity Jane. Always an ultimate veteran, but now a bona fide holder of a master's degree in kinesiology, Ben brought a new emphasis on athleticism to the team. In addition to throwing, catching and strategy advice, he guided the Janes through grueling sprint workouts and plyometrics designed to increase agility and speed, and insisted that everyone build their endurance through long runs. The Janes were a fun, goofy, and happy group this year, but they were also serious competitors. Their efforts were rewarded when they won the Regional tournament, and for the first time in four years advanced to Nationals in Spokane, WA.

Calamity Jane has become a firmly established team. The powerful leaders from years past have graduated and moved on, but new leaders have risen to take their place. Bob is busy with his children, Ben moved to Seattle, and Jason coached the men. After focusing on fundamentals in the fall, the 2002 - 2003 Janes wanted to step it up a notch for the spring and called on Gina Radice, a friend of some former Janes, to advise them. As a long-distance coach, Gina would commute from Indianapolis for the Janes' Sunday practices and all their tournaments. However, since she was less involved than some coaches, it was up to the Janes themselves to stay spunky, serious athletes. The Janes have had successful seasons so far, winning the title of overall champions at Oberlin's Prey for the Sun tournament in November 2003. Dorothy Payne now lives in Atlanta, the home of the high-quality Terminus tournament.

In 2004, the Janes were captained by Emily Neumann and Kelli Whall. The team had a lot of new players, and they rebuilt themselves well. The team did not make it to nationals, but made a good run for it at regionals. Unfortunately, Indiana University's graduation date was the same as regionals, so most of the seniors could not make it to the important tournament. Emily Neumann lives in Nashville, Tn and works as a freelance production assistant. Kelli Whall is in grad school in San Diego. In 2005 Lindsay Cunningham and Lindsey "Rabbit" Darling stepped up as captains. The team had a lot of work to do getting new players. They won the Berea, Kentucky tournament. Unfortunately, regionals were held in Naperville, Il, and the windy city proved it's name to be true. With strong upwind-downwind points, the Janes could not advance to nationals. 2007 brought captains Juliette McNamara and Dena Slattery. The Janes got a lot of new recruits in 2007, and they started their season out well by winning the Berea tournament again, as well as going to semi-finals at the Mardi Gras tournament.

In 2008, the Janes took the 5th spot in sectional competition, advancing to the Great Lakes women's regional. At the regional, they beat Case Western before falling to Ohio and Michigan in pool play. Advancing to the 2nd place bracket, the women's season ended when they fell to Notre Dame.

Now, in the 2009 season the Indiana University Calamity Janes are looking to continue the Jane tradition and make it back to nationals once again.