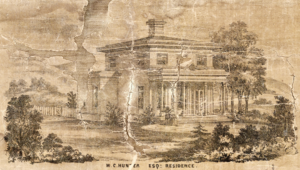 Hunter House was a spectacular mansion at 11th Street and Walnut Street. It was built in the early part of the 19th century and torn down in 1974. The address was 644 N. Walnut St.

The house was built by Morton C. Hunter. It was a Greek Revival mansion with a porch, and the mansion grounds extended for the entire block between Washington Street and Walnut, and from Cottage Grove Street to 12th Street. A long drive wound around the house from Walnut to Cottage Grove. Morton Hunter's daughter Minnie, who had lived the majority of her life in the house, inherited the house and sold it in 1919 for $4600, to Max Lade, comptroller for Showers Brothers. Lade remodeled the house, adding a classical revival portico to what had formerly been a Greek revival house. He also subdivided an area of 32 lots around the property into what is known as "Lade's Addition", and the house went through several owners and tenants. Although the city attempted to pass an ordinance prohibiting its demolition, a wrecking permit was obtained rapidly, and the house was demolished in 1974.