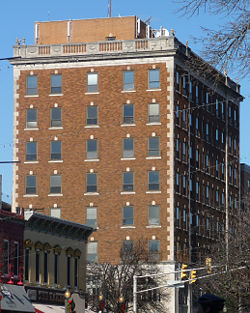 Graham Plaza is an 8 story office building plus basement on the north-west corner of the downtown square. It is currently owned and maintained by CFC, Inc. The outside of the first and second floor is made of limestone while the rest of the floors are red brick with a mix of limestone blocks. There is over 50,000 square feet of office space within the building including three storefront spaces on College Avenue.

The building was erected in 1929 on the site of the old Bowles Hotel, formerly the Gentry Hotel, built in 1895. The architect was Ross Caldwell of Indianapolis. A photo showing the hotel as it neared completion, with part of the Gentry Hotel still standing, can be viewed at the web site of the Monroe County History Center. 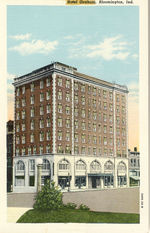 Built as the Graham Hotel, the building was restored and converted into an office building in 1979 by CFC, Inc. as part of an effort to revitalize downtown Bloomington. The building connected with the Regester Parking Garage up until the garage was demolished in 2003. When the new Hilton Garden Inn hotel was built in the front half of where the parking garage was, it included enclosed connections to Graham Plaza in the north stairwell.