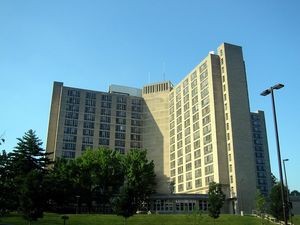 Eigenmann Hall, currently officially known now as Eigenmann Residence Center, is a 14 floor dormitory on the Indiana University campus located at 1900 E. 10th Street. It was built in 1968 and dedicated on November 15, 1970. It is the tallest building in Bloomington. It is named for Carl Eigenmann, a famous ichthyologist.

Eigenmann has four wings. The wing of each floor connects at an open common area with 4 elevators. 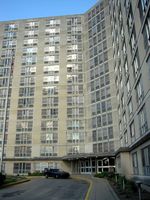 Front entrance on north-west side

For a long period of time, Eigenmann Hall was a hot spot for international students. Because it housed most of the international students who lived on campus, it was the only dorm that was open year round including during all school breaks. At one point, students from over 100 different countries speaking over 40 different languages lived there. Some adventurous Americans lived there for the experience of having neighbors from many different cultures living on your floor. It was also a popular spot for graduate students. It was the melting pot of Bloomington. This era ended in 1998 when the Eigenmann Residence Association merged with the Residence Halls Association due to pressure from the university to make better use of Eigenmann due to it having many vacant rooms. Up until 1998, unless you were an international student, you were required to be over 21 to live in Eigenmann hall. The fall of 1998 was the first time under 21 american students were admited into the dorm. This came in the form of freshmen students moving into the first four floors.

The dorm has had its basement and first floor remodeled to house several new services including a branch of the IU Bookstore, Campus Card Services and Copies & More.

On April 23rd, 1992 a graduate student, Susan Clements was stalked and murdered by an ex-boyfriend, Andreas Drexler, in what is believed to be the first murder of an IU student on the IU campus. Drexler drove from Stanford University with the intent to kill Clements, whom he had been threatening for several months. Police found Drexler's car filled with 2000 rounds of ammunition, a hunting knife, three gasoline cans and a bible. They also found a campus map with Eigenmann Hall circled. Clements was killed on the 14th floor, having sustained three bullet wounds. Another student, 22 year old Steven Molen tried to intervene and was also shot. He died six days later. Molen and Clements were good friends at the time and it is believed the Molen tried to protect Clements. After shooting the two students, Drexler took his own life a few blocks away from Eigenmann Hall. Partly because of this event, Indiana was among the first states to pass anti-stalking legislation.