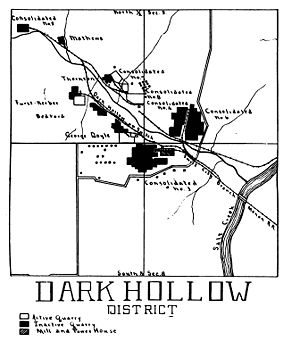 Dark Hollow was a location near Oolitic where many stone quarries were dug. The earliest was the Dark Hollow Quarry Company, which incorporated in 1877 and was composed of Col. A. C. Voris, S. B. Voris, Davis Harrison and R. Rogers. The company was successful, providing stone for the Indiana State House and convincing the Monon Railroad to run a spur from their Bloomington & Bedford line. The owners foresightedly sold out in 1890, as the company would go bankrupt in the depression of 1893-1894, and then become part of the Consolidated Stone Company.