Chris attended Indiana University from 1994 - 1999 and earned a B.S. in Speech Communication and Theatre from the School of Education. Chris lived on campus for two years in Read Hall, then off campus for three years at Barrington Place on east 10th Street.

All 5 years of college (victory lap included), Chris played the sousaphone in the Marching Hundred; he also played for two years in the Big Red Pep Band at IU Men's Basketball games. During this time, Chris was an active Brother of Kappa Kappa Psi, an honorary fraternity for musicians and bands members. He served as Secretary, then President of the Alpha Zeta Chapter of Kappa Kappa Psi at IU. Chris also held the position of Secretary/Treasurer of the North Central District of Kappa Kappa Psi, covering five states and almost 30 chapters.

While at IU, Chris spent a lot of time running with a great group of friends: Fred Milch, Chris Crane, Brian Richards, Greg Vargo, Jordan Johnson, and Chris Raser were the key players for Chris while at IU and for many years after graduating.

In addition to working at IU, Chris also ran his own photography business for 5 years before closing the doors in January 2011. 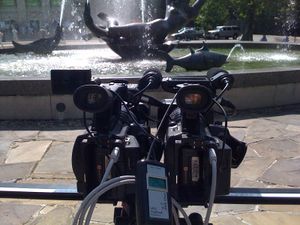 Chris has his Batchelor of Science in Education from the Indiana University School of Education, class of 1999. He is now pursuing a graduate degree in the MIME program at IU, this is a Masters in Immersive Mediated Environments. He is keeping a slow pace and taking one class a semester to better balance school, work and family.

His current class is T583 in the Telecom Department. The final project is planned to be a very short documentary of IU student activities, particularly the physical and visual arts. The real catch here is this is being produced in 3D using a pair of Sony Z7U HDV video cameras from Telecom and mounting gear from the AVL. 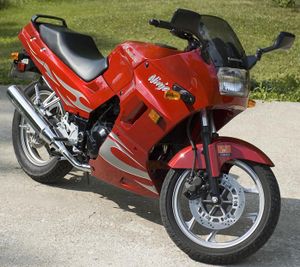 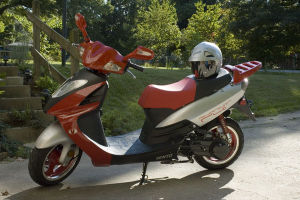 The old scooter, it has a new home in Chicago.

Chris has completed the MSF Basic Rider Course offered by ABATE of Indiana Region 6. This course takes place of the Bureau of Motor Vehicles riding test for the motorcycle endorsement. He purchased a 2007 Kawasaki Ninja 250R and sold the Vento Phantom r4i scooter to a gent in Chicago.

The Herald Times interviewed Chris in July about riding a motorcycle and the article is now available online (subscription needed).

Chris rides mostly rain or shine about 10 months out of the year. The parking is enjoyable as is the gas mileage.

Chris sold the Ninja in 2010 after realizing that his job and commuting needs weren't the best fit for a motorcycle with regard to carrying equipment and other materials around campus and across town.

After graduation, Chris discovered the gaming bliss of the IU Computer Gaming Club and has been pitching in from time to time with photographic and projection help. He also co-founded the Analog Games Society (part of the IUCGC) with Adam Sweeny. He now works for UITS as part of the Advanced Visualization Lab at IU and he's also a small photography startup; mostly nights and weekends. More information is on the Chris Eller Photography page. Before working for the AVL, Chris spent time with the Unix Systems Support Group and the Student Technology Centers Logistics team while associated with UITS. After graduation, Chris landed a job with the School of Education at IU as the database coordinator at the Indiana Center for Evaluation. In what seems like a career choice, Chris contributes regularly and frequently to Bloomingpedia.