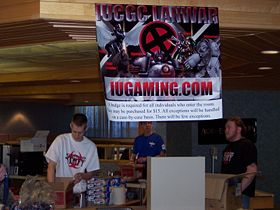 Gaming at IU fomerly known as Indiana University Computer Gaming Club (IUCGC), an official student organization of Indiana University, was founded by Jonny Sweeny and Andy Jones in the Spring of 2000. The first LAN War was 18-19 November 2000. In an effort to reach more gamers, the IUCGC spawned a gaming group dedicated to non-electronic gaming. The Analog Games Society was officially born on September 14th, 2007.

Currently, the CGC@IU has over 800 members participating in events year-round. Elections for club officers occur each April. The officers for 2008-2009 are as follows:

(Moniker - Name - Position in the club) 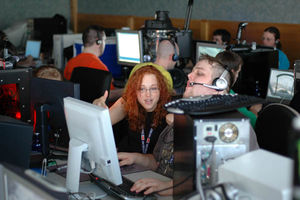 The club is best known for their semi-annual LAN Wars. These events attract 150+ gamers from all over Indiana and the Midwest. Their is a 15 dollar fee in which you may sign up for on their website[1] by yourself or as a group, with a minimum of 5 people. If you choose to sign up as a group, you are able to get in an hour early and pick your seats, or you may pay at the door. When you enter you are handed a name tag with your gamer alias on it (if already signed up via internet), or you will receive a blank name tag in which you may modify at your will. There are typically five formal tournaments and thousands of dollars worth of prizes from several notable companies. A free dinner is always provided at the event. LAN War 15 will feature free energy drinks and high-speed Internet, courtesy of the University on the 15th-16th of November, 2008 in Briscoe Quad, Bloomington.

Recently, the club has expanded to include several new events, including Rock Band: Battle of the Bands, and a new event, Console Chaos (replaced by the more recent console war), which is still in its infantile stages.

Due to the length of the events, (typically over 24 hours long) the LAN War at one point hosted a Twinkie eating contest. The event was a means to give people a break from their computer games while still providing entertainment. Eight to ten people were given a 12oz. drink, 1 box of Twinkies and a single Hostess Cupcake. The person who finished their entire Twinkie box and cupcake first won a prize.

In an effort to attract more members to the gaming club, Gaming at IU held its first console war on March 5, 2011. Unlike the LAN wars it featured only console games and was not an overnight event. The event was sponsored by NOS and featured COD Black OPS, Super Smash Brothers Brawl, and Halo Reach. Attracting around 100 people, the event was held in the Union Street Center. After the event, Gaming at IU has decided to continue expanding its appeal to console gamers with more console events to come.

The club website (www.iugaming.com) is where current events are posted. It includes a very active forum where members plan meetings, events, and schedule games to be played across the internet.

Beginning on 28 January 2006, the club has starting having "Mini-Lans" where smaller groups of gamers physically meet to play. These occur in the Informatics Building once per month from 11am to 11pm. Typical attendance is 30 gamers. As of 2011 mini-Lans have ceased to occur.

Although recently neglected, IUCGC has a podcast that has been going since 2006 and can be accessed through Winamp, ITunes, or Beep-Media Player. You may go to the Podcast section of their site[2] and listen to previous podcasts along with the information on listening for future podcasts.

Visit http://www.iugaming.com/sponsors.cfm to see the current list of sponsors.