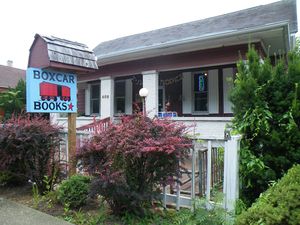 Boxcar Books was distinguished from other bookstores in Bloomington not only because of its non-profit, volunteer-run status, but also by its extensive selection of books relating to activism, D.I.Y. crafts and repair, veganism and 'zines, self-published works generally thought to have been killed off by the Internet. Despite its focus on these materials, Boxcar also had large sections dedicated to fiction, magazines, biographies and memoirs, history, philosophy and religion, children and young adults' literature, race issues, music, film, feminism and women's studies, erotica, GLBT and sex. It also featured a room devoted to comics (commonly spelled "comix") and graphic novels.

Boxcar also had a large meeting space open to any organization desiring to use it for meetings free-of-charge which had also served as the home of the Midwest Pages to Prisoners Project, an organization devoted to providing books to prisoners to aid in their self-education and rehabilitation efforts.

Boxcar Books was opened in September of 2001 and celebrated its seventh anniversary as a full-fledged store and community center in February of 2009.

In May of 2008, Boxcar announced it had joined a class action lawsuit against Indiana House Bill 1042. Indiana House Bill 1042 would have required booksellers to register with the Secretary of State if the bookseller offered for sale even a single “sexually explicit” book or magazine as part of its selection. Because Boxcar saw this not only as an infringement on the freedom of speech but also a threat to independently owned booksellers across the state (especially those that also sell children's literature), Boxcar promptly protested the bill and joined the array of independently owned bookstores and free speech organizations in the fight against it. The bill has since been repealed with the promise of narrowing its definitions of adult materials in order to target exclusively adult booksellers.

In July of 2008, having had their building at 310A S. Washington (which they shared with Landlocked Music and The Midwest Pages to Prisoners Project) bought by Bloomington Transit, who intended to demolish the building and build a new bus station on the lot, Boxcar began renovating the recently vacated building at 408 E. 6th Street, the former Cereal Barn restaurant. Boxcar reopened on 6th Street on August 4th and had a grand reopening party on August 22, 2008 with music by The Fatted Calf String Band and catering by The Runcible Spoon.

Rock N' Roll Prom had a yearly fund raising event for Boxcar Books and Midwest Pages to Prisoners Project. It was traditionally held in The Bluebird nightclub, and attendees are encouraged to "dress to impress" or follow the prom theme with a clever costume. Attendees were encouraged to purchase staged prom pictures taken on scene with their dates and friends.

The prom theme of 2008 was "Over the Rainbow," and the prom performers included a Björk cover-band (fronted by Boxcar's own Tess Hannah), Bruce Cougar Mellonstein (who covered songs of both Bruce Springsteen and John Mellencamp), The Mother-Truckin' DJs, and The Go-Go's (a Go-Go's cover-band).

The prom theme of 2009 has been announced as being "Talk Nerdy to Me."