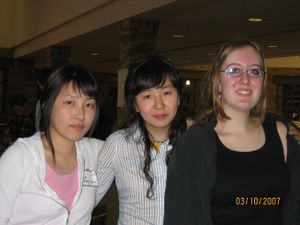 The Bloomington North Japan Club is a club at Bloomington High School North for any student interested in Japanese culture and language. This student-run organization participates annually in the Japanese Olympiad of Indiana as well as organizing several local activities for the school.

Meetings are usually held in Mrs. Jeon’s room during Seminars, but after school sessions are not uncommon. Olympiad participants meet after school more often than regular members. The students call Mrs. Jeon sensei (teacher), and she runs the meetings with the intent of organizing the students' ideas into doable activities. In the past, students elected presidents to oversee meetings, but this has ceased to be the case. Average meeting attendance is fifteen to twenty students.

Students do regularly go out to Bloomington’s Asian markets, such as Saraga Market, and purchase Japanese snacks to be eaten at meetings. During the meeting itself students will, while eating, brainstorm and plan for future activities. The activities themselves will take place at specifically arranged times decided on by the members. Meetings are also a place for the students to interact and learn about Japanese culture.

To be a member of the BHSN Japan Club, one need only have an interest in Japanese culture, language, and customs. The majority of Japan Club members come out of North’s Japanese classes, but the club is open to anyone. Preliminary application is made at the beginning of the year by signing up in Mrs. Jeon’s room, with definite application involving whether or not a student actually shows up at meetings.

“The main thing that we do is community outreach,” says Jeon. This is clearly the case with the BHSN Japan Club, as is evident by its heavy connections to local international activities. Each year the club participates in Lotus Blossoms at Binford Elementary School and helps the IU Japanese Student Association with Japan Night.

Some years Japan Club will hold a movie night every few months. The last film shown was the anime movie Kaze no Tani no Nausicaä (Nausicaa of the Valley of the Wind). During the 2005-2006 school year, a group of club members went to see Memoirs of a Geisha, as geishas and their music are a significant part of Japanese culture.

Oftentimes Japan Club’s activities involve food, which is in no small way due to student control of the club. Last year in fact, some club members in Japanese II prepared okonomiyage for the World Language Department’s teachers. Other foods made by Japan Club students are sushi and takoyaki (balls made of octopus and batter).

The annual highlight for Japan Club, aside from competitions, is its T Shirt Design Contest. Each and every year, the club holds an open entry contest to select a design for its T shirts. Entry is open to anyone in the school and there are always at least twenty entries. The design requirements are that it be related to Japanese culture and promote Japan Club in some way. Usually most of the designs bear some type of anime influence or character. The selection process for the final design involves the Japanese classes voting on which design they prefer for the club. The winner receives a complementary T shirt and the pride of watching several dozen people walk around the school with his/her design on their shirt. I the 2005-2006 year, there was a special case: Multiple designs ended up appearing on the shirt. One design was put in the front, one as a crest on the arm, and one on the back of the shirt. Generally however, only one design is used.

In 2006, the club arranged for several North and South students went to Japan by means of an Indiana University grant. The next year, Japanese high school students completed the exchange by spending one week in Bloomington. A second exchange is unlikely in the near future, but the club remains optimistic.

The BHSN Japan Club annually competes in the Japanese Olympiad of Indiana (JOI). The competition is a statewide contest over Japanese culture, language, and history. It is divided into three levels (2, 3, 4) that correspond to years of Japanese class (II, III, IV) taken by the student competitors. There are around twenty teams per level with two to three students a team. Most years North sends a team to all three levels, and will place well. 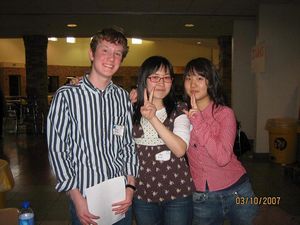 Bloomington North’s team of Yoo Jung Jang, Saori Parker, and Hee Soo Suh won first place in the entire state of Indiana. The competition was held at Warren Central High School in Indianapolis. The team met two to three times a week after school starting in January to prepare for the competition.

The club is in its third year with Molly Jeon as Supervisor, a position she has had since 2004. During her first year as a teacher at North the club was managed by Yoshiko Cockerham, the Japanese teacher at BHSS. The club has always done the same type of activites and competed, however. In fact, Cockerham spent the entire year in which she was in charge preparing the club for the Japanese Student Exchange Program.

The Indiana Action for Healthy Kids Grant is a program sponsored by the Anthem Blue Cross Blue Shield foundation. Its purpose is to promote healthy lifestyles in children and to fund activites that encourage this. In the 2005-06 school year, Jeon and North's Japan Club applied for and recieved the grant.

As part of their grant, Japan Club hired instructors to give Yoga and Karate lessons after school. The lessons took place on Friday afternoons and were free of charge to the students. An announcement was made during North's morning announcements, informing students of the lessons. Several students in and outside of Japan Club attended the lessons, which were held for several weeks.

The main part of the grant was implemented at Bloomington High School North's annual International Day. Entitled "Eat, Exercise & Win," it was a collaboration between Japan Club, the German classes, a Spanish teacher, and students of international descent. The idea was to expose North students to healthy foods from various countries. Each student who approached the table at International Day was given a pink sheet of paper which listed all six foods, their origin, their ingredients, and nutritional information. The foods featured were:

To encourage student participation in the program, a raffle was held. If the student tried at least three items from the table, they could put their name on the back of their pink sheet and place it into the box at the end of the table. This entered them into a raffle which featured healthy prizes, such as a one week pass to the Sports Plex.

To comply with grant requirements, activities had to be documented and had to have an explanation as to how they fulfilled the grant's purpose. In addition, the first period Japanese and German classes spent the entire period preparing for International Day. Several students were called upon to volunteer to man the table during all four lunches that day. The project proceeded well, and was considered a success.

Japanese Restaurants and Businesses in Bloomington