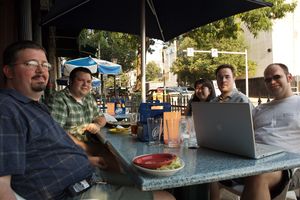 The Bloomingpedia Council meeting at the Crazy Horse

The Bloomingpedia Council is a small group of people who help determine the overall direction of Bloomingpedia, help to moderate articles, allow or deny access, administer the software and provide examples of articles. It was formed on August 5th, 2005 with founding members Mark Krenz, Marina Krenz, Chris Robb and Marco Bartholomew. Marco had subscribed to the contact list for the group using an email account that he didn't check very often, which led to falling out of communication with him (no hard feelings).

The council has been quite effective in getting the word out about the site and helping enforce some light rulings on how articles should be formed and the layout of the site.

Chris Robb and Rick Schmelz have also gone to give a presentation on a class by Linda Reeves at Bloomington High School North, which led to several students contributing articles.

Mark Krenz has given presentations at a Unix Users Group meeting on wikis and also in a class by Thom Gillespie in the Department of Telecommunications, both of which led to attracting several contributors.