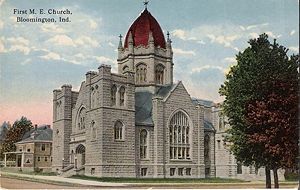 Badgley & Nicklas was a Cleveland architectural firm active in the early 20th century. They designed the following building in Bloomington:

The church was badly damaged by fire in 1937, but the foundations and exterior walls were intact. The church was redesigned and rebuilt without the lantern dome over the sanctuary. H. M. King of Louisville was the architect for the reconstruction.