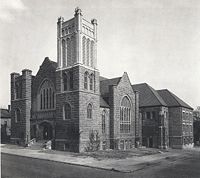 H. M. King was a Louisville architect active in the mid-20th Century. In Bloomington he designed the following building:

The First Methodist Episcopal Church was designed by Badgley & Nicklas of Cleveland. Construction was completed in 1910. A fire in 1937 badly damaged the church, but the foundation and exterior walls were intact. H. M. King redesigned the church, removing the damaged lantern dome and adding a tower at the southwest corner of the building.