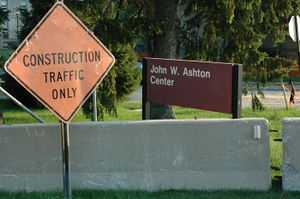 As seen from 10th Street

Ashton is a residence complex on the northeastern end of the Indiana University campus at the corner of 10th Street and Sunrise Drive. It was initially constructed in 1946, and simply called Dormitory Unit. The original buildings were constructed quickly, of uninsulated concrete block. In winter, many rooms would develop ice on the interior of the wall. Possible in the 1970's, carpet was put on the walls of the corner rooms as some added insulation. Despite this, residents had a fondness for the older dorms. The lounges of each had firelplaces, and were enclosed with 1.5 story, floor to ceiling windows. For quick, cheap construction, the buildings did manage to have a certain aesthetic quality.

Later on, after the initial 1946 construction, Weatherly Hall was added, and even later (possibly 1960's), the newer buildings were added.

At some point, it became known as the Graduate Residence Center, before being renamed after John W. Ashton in 1980. It was comprised of seventeen separate buildings, most no higher than three stories. Many of the individual buildings were devoted to special residential programs within the dorm system at various times. In the 1980's, for example, Aydelotte housed the French and Spanish Houses, Aley housed the Russian House. Mottier and Moaffatt housed the Residence Scholars program in the 80's. ALL rooms in Ashton Center were single rooms.

In 2020, Ashton was used as a quarantine center for students who tested positive for COVID-19.

The center underwent demolition of select buildings on the eastern side of the center in the summer of 2006 to make way for Union Street Center. This demolition also caused a partial closure of 10th Street. (see Road Construction).