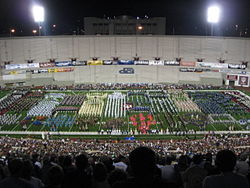 Corps on the field for finals awards

The 2008 Drum Corps International World Championships were held at the Indiana University Memorial Stadium in Bloomington the week of August 5th - August 9th, 2008. This event included about 40 drum and bugle corps from across North America and should brought about 40,000 people to Bloomington. 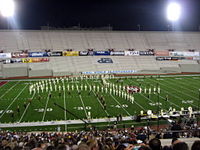 Leading up to the event 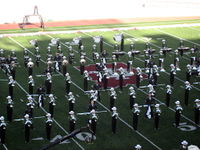 The following is a known list of locations where corps are staying and practicing during finals week: 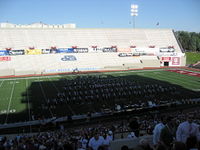 The shadow from the press box

Every year, there are usually concerns that the first couple corps will have to put up with the sunlight shining in their eyes. Fortunately, the press box at IU's Memorial Stadium is tall enough that it provided more cover than usual. 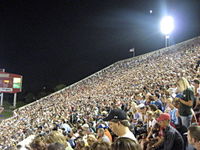 Fans in the stands

Dan Acheson, director of DCI, said that ticket sales had been lower than previous years, but that he attributed that to a slow economy. However, around 9pm on finals night, it was apparent that the stadium was about 98% full on the viewing side (west side).