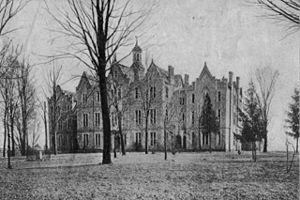 William Tinsley was a Cincinnati architect active in the mid 19th century. Born in Ireland in 1804, he came to the United States in 1851. When he died in 1885, his obituary described him as 'the oldest architect in the United States'. In 1860 he designed Christ Church Cathedral on Monument Circle in Indianapolis. In Bloomington he is know to have designed the following building: